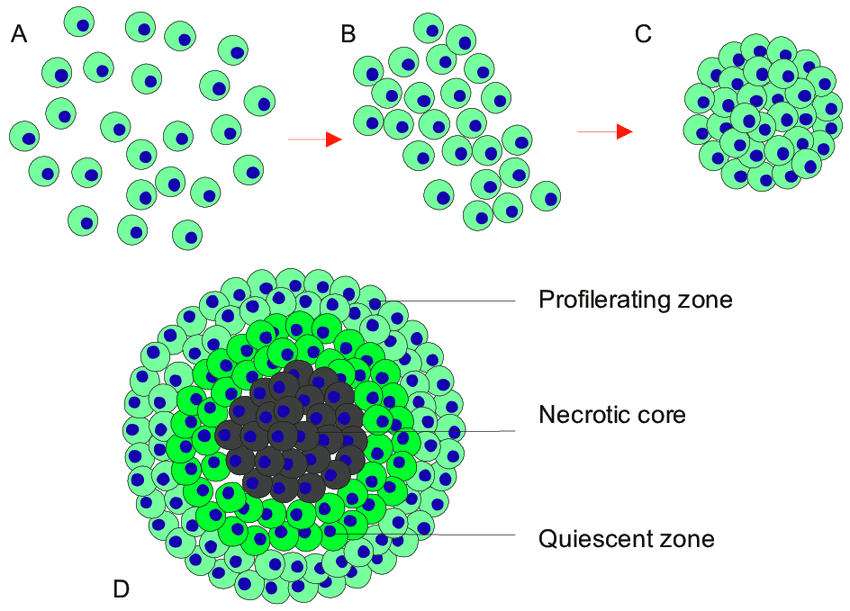 The Role Of Cell Type In Multicellular Tumor Spheroid Formation

Multicellular tumor (MCT) spheroids have become a vital tool in advancing tumor research in pathophysiological front, as well as in developing effective therapeutics. However, its reliability and reproducibility is determined by several factors one of which is the uniformity of size and shape of the spheroids. The size and shape of 3D culture spheroids differ significantly from that of traditional 2D monolayer cultures. MCTs establish and maintain strong cell-cell, cell-extracellular matrix (ECM) connections, ultimately affecting spheroid formation. Apart from these connections, the cell type, culture techniques, medium compositions and cell density are other factors that can cause variability’s within the MCTs, thus affecting its overall reproducibility (1).

The structure of MCTs

MCTs are primarily cultured with cancer cells, or co-cultured with other cell types such as fibroblasts, endothelial cells and immune cells. The cells typical aggregate and forms spherical spheroids merely days after seeding, encouraged by the use of low adhesion surfaces. The initial phase of aggregation is further facilitated by integrin-mediated adhesion to ECM and then compactly aggregated by E-cadherins. Once the spheroids have formed they contain a remarkable resemblance to in-vivo solid tumors, complete with a heterogeneous cell populations, oxygen and nutrient gradients. According to the oxygen and nutrient gradients present within the spheroid, MCTs exhibit a proliferating outer layer, quiescent cells present on the inner layer and a necrotic core (2-6).

MCT formation based on cell type

Such variability is a result of innate differences within cell lines, in cell-cell adhesion, thus affecting the overall MCT formation. Cell lines with compact spheroid formation indicated high levels of E-cadherins and those with tight spheroid formation expressed high levels of N-cadherin molecules. Thus the formation of a compact spheroid suitable for a reliable MCT depends on the expression and type of cellular adhesion molecules and must be taken into account when choosing an appropriate cell line used for further study or drug screens (7,8).