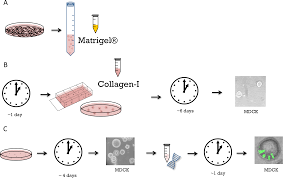 To replicate in vitro conditions of extra cellular matrix proteins presents within a tumour, Matrigel is used as both a matrix and additive to aid in spheroid formation. While some cell lines form dense macromolecular structures, others form loose aggregates poorly suited to model a tumour (1).

Although Matrigel is not the best prevalent choice for embedding, but due to its poor mechanical properties when compared to other tissues or embedding materials, its compositions and resultant biological properties promotes cell differentiation (2).

In spheroid research, primary use of Matrigel is to aid spheroid formation, although for developmental biology it is used for differentiation-inducing matrix. Spheroids embedded in Matrigel are useful for applications outside the cancer field as well. The differentiation of spheroids derived from human embryonic stem cells termed as embryoid bodies also benefit from the long-term cultures in Matrigel with increased differentiated primary trophoblasts markers, on the other hand embryoid bodies grown in suspension only demonstrate short-term elevation of these differentiation markers after 20 days whereas in 3D cultures with sustained elevation for over 30 days (3).

To cite an example, human pancreatic ductal adenocarcinoma cells form hollow spheroids but when implanted into Matrigel, they form ductal structures which mimic the aggregated structures of pancreatic epithelial cells found in vivo (2).