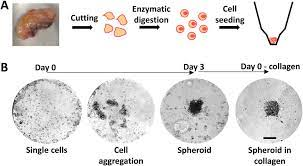 Multicellular tumour spheroids are three dimensional structures composed of cancer cells. They are formed from monolayer tumour cells when these are grown by various in vitro methods such as spinner flasks or rotation systems. Due to their cellular organisation in spheroids, they have often been shown to recreate in vivo tumours more closely than two dimensional in vitro models. They are being used with increasing frequency in diverse fields such as tumour biology, including radiation biology.

Due to their architectural characteristics, multicellular spheroids are extremely useful in testing radiotherapeutic protocols, including dose rate, responses, and fractionation, radioimmunotherapy and the effects of combined drug treatments. Furthermore, they have also been used to investigate more fundamental questions of radiation-induced apoptotic cell death, cell cycle events, cell-cell interactions, and cell adhesion phenomena.

The growth of tumour cells as three-dimensional multicellular spheroids in vitro has led study more about tumour biology since properties of the in vivo tumour such as proliferation or nutrient gradients can be studied under controlled conditions.